The Journey to Myself. Part III

I joined Jeff on the ride to Uncle Robert’s. We had fun jumping over the little hills on the Red Road. The place was so full that we decided to walk over to Coconut Beach and to listen to the sounds of the ocean. On the way back Jeff took mine by the hand. I wondered why but let him do for this was Hawaii, the island of Love.

My stay at Kalani started to change its character. Instead of focusing on myself and continue my journey towards peace of mind, my mind became busier and more distracted.

I knew it was the price I had to pay and I liked to pay. 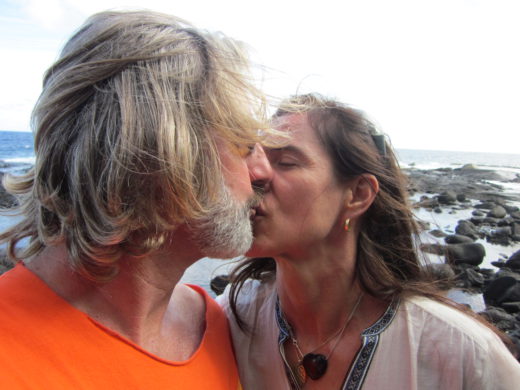 We became almost inseparable, met every day and did different trips on Big Island. Jeff showed me beautiful places nearby Kalani. But we also went to the north and west side of the island. The beauty of this island was incredible!

Twice we went through a week of being separated. Some things needed to be cleaned up between us. We came back together in a union of pure unconditional love overwhelmed by feelings. There was no doubt something really big was between us.

The three months stay flew by. I planned my trip back reviewing my achievements at Kalani. Did I get out from this journey what I desired? Did I achieve my goals? No. I did not. I have changed my track from self-growth to love and relationship. I was certain that whatever will follow, it was the right decision. I felt confused about having to leave the place where I felt truly home. 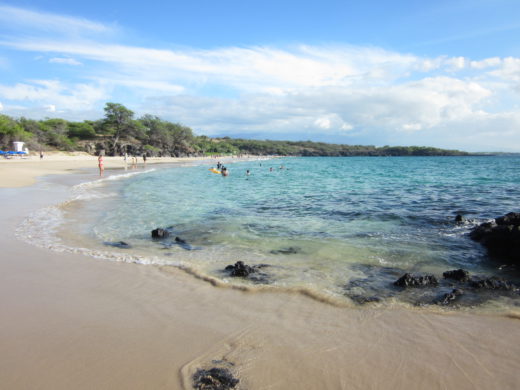 I started to plan my come back as a volunteer for a half year. I thought that I needed more time to try especially the life together with Jeff but also the life on Big Island. 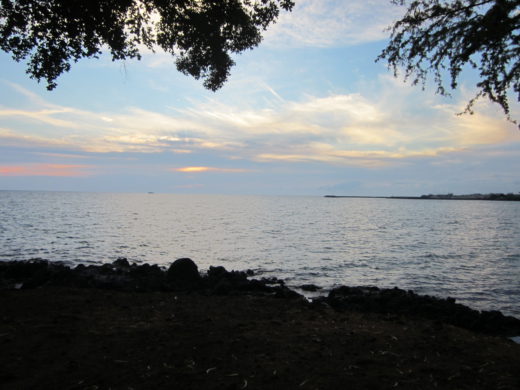 Several days before my departure, we spent two days on the Kona side. It was hard not to focus on leaving and feel happy, and enjoying the last days we had together. Anyhow, we planned to meet in November. I invited Jeff to come to Germany and spend some time together.

When the wheels of the airplane touched the ground of International Airport Frankfurt, I felt relief. The energy was friendly to me. Frankfurt, one of the busiest cities in Germany welcomed me kindly. I was home. Was I?

The following days I felt exhausted, the need to sleep was overwhelming. I barely laid down to meditate and fell asleep almost instantly. Three weeks have passed by until I was able to find a new rhythm and started to prepare my training units at the university. I missed Jeff badly even though if the internet connection allowed, we skyped every morning.

At the beginning of October, I collected all the documents I needed for the U.S. visa for a half year, sent my application and scheduled an appointment for the interview.

Two weeks later I was on my way to Frankfurt. I decided to go by car to be more flexible and visit a friend in Dortmund, about two hours away from Frankfurt. I left four hours earlier to have enough time in case I would run into a traffic jam.

Even though I had plenty of time I drove as fast as the road conditions and traffic rules allowed me to do. I only stopped for the necessary breaks and didn’t waste any time. My appointment was scheduled at 10 am. Close to six o’clock in the morning I approached Frankfurt and was only about 30 minutes away from the U.S. Embassy. I looked forward to parking my car somewhere in a quiet spot and take a nap.

Unfortunately, just a few minutes later I hit a road blockage after an accident. There was no way out. I didn’t know what was going on for I didn’t have a radio in my car. I used a common sense, anticipated where traffic jam could occur and adjusted taking another road or time.

This time there was no escape. First off I didn’t worry because I created a very comfortable time buffer. But after three hours in the traffic blockage and only limited moving forward by stop and go I started to get nervous.

It was about 9:20 am when I saw a chance to leave the traffic and pulled my car over to the freeway shoulder and then left following the signs to Frankfurt. I didn’t have any idea where I was and how to get to the embassy. The time was running and my nervousness increased. “What am I doing?” I felt that only God could bring me there on time, and decided to let it go.

I don’t know how many traffic rules I broke that morning. I also don’t know how I was able to bring me back on track. When I thought that I was close enough I parked my car and ran. It was 9:40 am. I didn’t know that the distance to the embassy was still about 5 km. I ran until I saw the big high fenced building complex of the U.S. Embassy. My check-in ticket to the embassy was stamped 10:01 am and I was totally drenched in sweat.

About one hour later I saw my number showing up on the screen and walked over to the counter. I felt a little nervous for I never attended that type of interview. I was prepared for all kind of questions and carried a heavy folder with all kind of documents which could be important to show.

However, the officer wasn’t interested in my person at all. He only asked questions about Kalani. I was prepared for all but not for this. Kalani provided me with an Embassy Letter in that they confirmed that I was accepted in the long-term Volunteer Program. The letter made a rather poor impression on me. However, I thought I would be OK, I thought many international long-term volunteers have used that letter for the visa.

But the final decision was a “no”, there was no visa for me. The officer even inspected Kalani’s website and assumed that the way Kalani utilized the term Volunteering was not in alignment with the laws for volunteering and charity.
I left the embassy in quiet. My head was empty. I was devastated.

I hope you enjoyed this part of my journey. If you are curious about what happens next, join me in the following part of this story.

Sending much Love and Light your way!
Aloha, Jenna