The Journey to Myself. Part II

At the end of June 2015, a beautiful large Lufthansa Boeing brought me over the big water to L.A. I needed to run to find the United Airlines service point to change my flight data for my flight back home. Click here to read the first part.

In Frankfurt, I almost have been excluded from the flight because scheduling my stay in the U.S. I did not include the day for the flight back and my entire stay counted 91 days.

It was a lot of excitement because for some reason United could not change my flight data in Frankfurt. I promised the airport officer to take care of it in Los Angeles and he let me pass.

About five and a half hours later an airplane of Hawaiian Airlines was approaching Hilo, the biggest town in the southeast part of Big Island. It was shortly after seven o’clock but the sun was already setting. A first big surprise for me for in the summertime in Germany I was used to enjoying daylight past eleven o’clock at night. The second big surprise was that my pickup service from Kalani was already there even though my airplane arrived 45 minutes earlier than scheduled.

A warm air surrounded me after leaving the plane. There was a sound like thousands of birds in the background, the sound of east Hawaii, the coqui frogs.

At Kalani, I got accommodation in an A-frame at the edge of the jungle. Charles, the person who picked me up, brought my suitcase into the A-frame, gave me some instructions for the breakfast and left. I decided to take a shower after this long trip, altogether about 24 hours, grabbed a towel and left.

I went a few steps, bowed my knee to the ground, closed my eyes and let the energy penetrate my body. I felt intense joy filling up my body. Something was burning on my skin. Mosquito? I opened my eyes and found myself in completely dark. Pitch dark. Smiling, I went back, grabbed a flashlight and left to the Rainbow Room.

This was my first hours in Hawaii. I felt that something very big is happening. I could feel high energy everywhere. When I passed trees or plants they seemed to open their branches like arms to me, hugging me. I greeted and hugged them back. 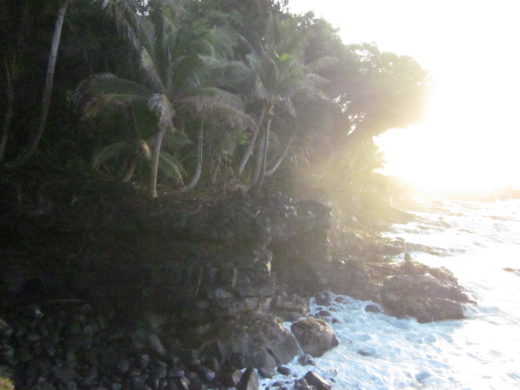 Next day I woke up early in the morning. I didn’t feel any jet lag. I was excited to start my day. I took a little walk around, greeting avocado trees, gum trees, big acacia full of orange-colored blossoms and many other trees or plants familiar to me from the garden department.

I was scheduled to work in the Horticulture Department of Kalani, taking care for greens. I loved to work with plants and the soil. Plants are possibly the most grateful and most courageous beings on the planet. They simply enfold their beauty doesn’t matter what. They don’t care if they die. They probably know that all life is eternal. I love their simplicity and often meditate with plants. 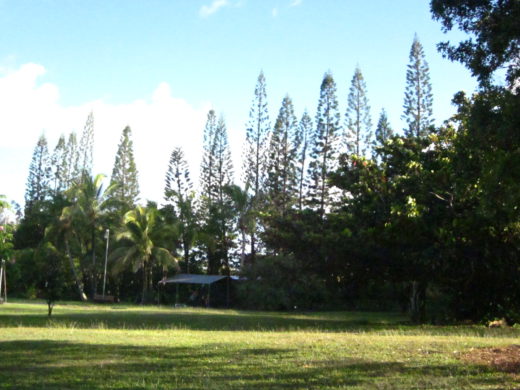 Two days after my arrival I met my team. I didn’t feel any stress but butterflies in my belly. This was special for I wasn’t used to talking in casual English, especially not in groups. I intensely polished on my English with Cris, my English teacher, but there were so many new words.

On the third or fourth day at Kalani, I made a discovery! In our morning meeting, every team member got an opportunity to express gratitude for five things. That morning I raised my hand. I was so surprised hearing myself saying: “I’m grateful for feeling home. All is good and complete. I don’t feel any desires. Thank you.”

To work with my team felt great. All interactions were so different from what I knew from my teams in the scientific world. As a coach, I mainly worked by myself.

We helped each other, got lots, lots of work done in a very short time. A few days after joining the team I was included in splitting the tip Kalani guests gifted to the staff. I was grateful and proud.

To work in that team and to work with plants filled up my heart with so much joy. I guess I was constantly smiling. But the peace of mind – one of my main goals for the stay at Kalani – hasn’t shown up yet. I wrote a lot in my diary, I thought a lot and I learned a lot of English. 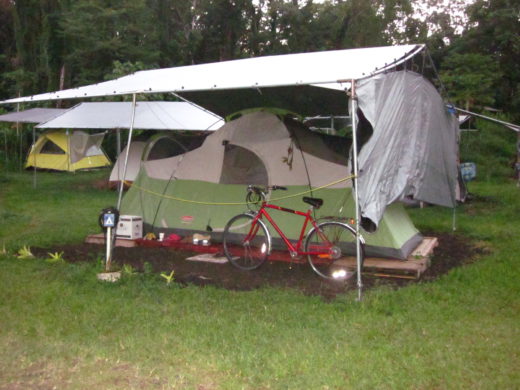 About two weeks after my arrival a new male face came to my attention. The first time I saw that man I experienced a moment. It was at the Dining Lanai. He was sitting at the head of the table surrounded by others. I saw his face very clearly, then the moment was over. Later on that week I saw somebody at the Maintenance Department washing his motorcycle, and I smiled passing by on my beach cruiser. It had a moment again. I did not know that it was the same man, I saw at the Dining Lanai.

On Wednesday was Uncle Robert’s Night, a beautiful place with a little marked offering self-grown or self-made products, food and drinks and awesome live music by the Awa Band.

I have not been there yet and was dated with a friend to visit this place. The van that would bring us there left at 6:30 pm so I hurried to wolf down my dinner. My friend and I were sitting alone at the long table, for it was shortly after six and the dinner just started.

Suddenly a man joined us seating himself at the head of the table next to my friend. It was the same man I saw at the Dining Lanai a couple of days ago. We introduced briefly to each other. My friend and the man started a conversation while I was wolfing down my meal. 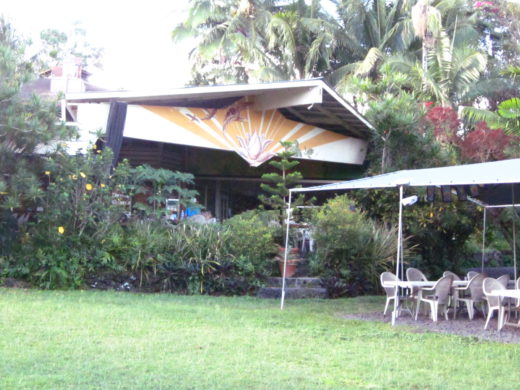 All of sudden he quit talking to my friend and started asking me questions. I knew this type of questions asked already by more or less everybody at Kalani: Where are you from? In which department do you serve? How long do you stay? My mouth was full of food, I swallowed and answered his asked and not asked questions in one sentence. Uuups. It seemed I was a bit impolitely so I added “Today is Uncle Robert’s Night. Do you go there? We will leave soon. Need to hurry. The van is leaving soon.”

“If, I would go by motorcycle,” he answered. Would you join me?”
“I’m a driver too,” I smiled by the idea of having something in common with him, but then noticed that he was still waiting on my answer.

“What about some flexibility?” He smiled. It was Jeff the man, I married several months later.

The story will continue. To read more join me in the next part.

Sending much Love and Light!

2 thoughts on “Meeting My Soulmate”