This story is about a cat and it is a true story. I never ever encountered such a kind and appreciative being like her. Her entire body including all of her expressions was a perfect manifestation of gratitude and appreciation.

This post will be about Lani and the teachings she presented to me. As you heard, Lani is a cat. But she is not an average cat. She is a very special being, a four-legged angel who decided to be my friend and teacher for some period of time.

Lani is not a part of this world anymore. She died hit by a car in front of our lot, just five minutes after I talked to her the last time. It took me several weeks, after her death in November 2019, to start this post. My heart became very heavy. I knew I needed to write down her story but the errands of my daily life pushed it away again and again. I also felt guilty for her death, cause I received the call to share cats’s teachings with the world, and didn’t manage more than to publish two articles.

I carried this burden for some time not doing what I was supposed to do and ended up dropping down my usually very high frequency and tears came into my eyes each time I was reminded of Lani’s beautiful being. Finally, I found the access to share Lani’s story with you. Thank you for being on her tracks with me!

This post is addressed to everybody who loves animals, want to understand them and to learn from them.

A Stray Cat at Our Place

And so it begins. On a sunny morning at the beginning of February 2019, a stray cat showed up at our place. The cat was small, maybe of a size of a six- or seven-weeks-old kitten. Her white fur looked unkempt and neglected but her eyes were big and shiny like a clear summer sky. She had funny gray markings on her head and in her face that made her look even dirtier than she already was, and her tail had the color of amber. 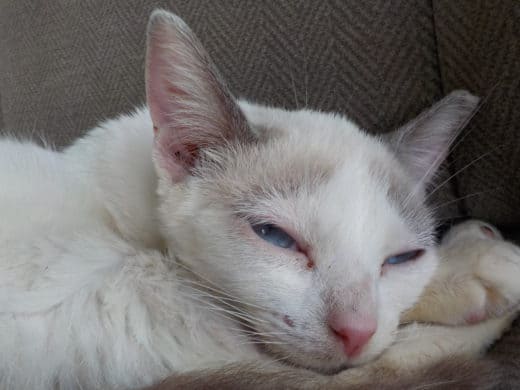 When I saw her for the first time, she was drinking water from a big red bowl we keep outdoors for our cats to drink. She drank for a long time and looked over to us. Her face looked grouchy. A few minutes later, she decided to come up to the lanai and lied down nearby my chair. She took some of the cat food I offered her but left a little later. I was sure I would see this cat again.

She came back later the same afternoon and stayed at our place. She picked a spot on the shelf on the lanai on that we stored bags and curled in upon them. Later I brought her an old pillow to make her new place more comfortable.

I could not touch her or come close for she was shy and hissed but watching her, I got the impression that she suffered at the same sickness as Honda did, our rescue-boy who found home in our place only a few weeks before her. A bloody secretion was running from her nostrils. Her paws were colored yellow and her fur looked matt, dirty and in overall poor shape.

With Honda, we had already a sick cat to take care of and it cost money we didn’t have after the Kilauea eruption, and also it was time-consuming. I was afraid to spend too much time with the cats neglecting my fresh started online business. Also, my husband suggested to bring her to the Humane Society where professionals would have taken care of her.

Anyhow, I felt that the cat came to us and the task was meant for us. As they say, you only get tasks that you can master. The healing job was meant for me. 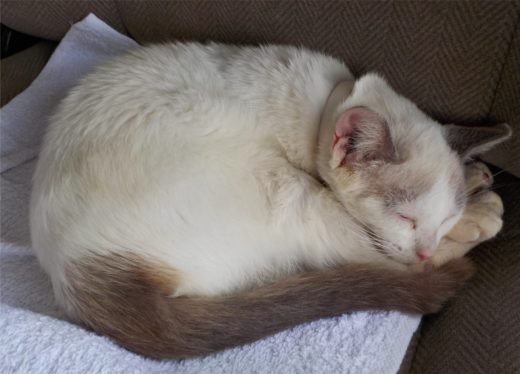 A few days later, she still lived on the shelf and the time came to name her. We named her Lani, what in Hawaiian means sky, because of her beautiful blue eyes that were so clear and so deep as the summer sky.

Lani avoided any tangible contact with us and the other cats Honda and Nani. Honda was friendly to her – because of similar markings on the head and face, we speculated that Lani could be Honda’s sister. Nani, our beautiful Siamese cat – another rescue cat – simply ignored her.

Lani was for a few days with us probably enjoying having a dry place to sleep, an abundance of water and food when she wanted but she didn’t bond with anybody. Sometimes she vanished for a short while but showed up back at the shelf little later. The tricky thing was, to find out how to help her.

That time, I restarted my Reiki Course I attended a year before to become a Reiki Practitioner Level 1. After over one year of practice on myself, and plants in my yard, it was time for me to continue with Reiki. I just learned the meaning and usage of the Usui Reiki Symbols Cho Ku Rei, Sei He Ki and Hon Sha Ze Sho Nen. I didn’t know how to help the cat otherwise than sending her distant Reiki.

There I was, a Reiki student, not really knowing what I was doing. But I was desperate to help, so I tried … and it worked out.

One day I stood close to the shelf where she was sleeping creating an intention and a prayer, and drawing the symbols and sweeping them softly over her.

After the second day sending Lani Reiki, she looked more vital and less grouchy. I could observe her walking around and exploring her new territory. She still avoided the other cats though.

I continued to send her Reiki – it was all I could do – and a miracle happened. One afternoon she was standing on the cabinet while I was cleaning up the table after lunch. She looked at me opening her mouth to make a sound but no sound was audible. Her soundless cry was extremely touching. I talked to her encouraging her healing and reassuring that she was home. She looked at me continuing to make a soundless miau. 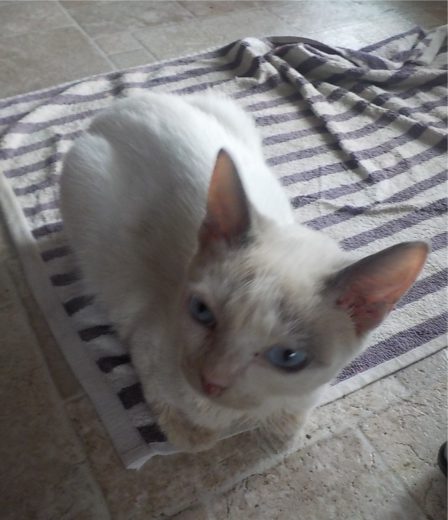 The Ice Is Molten

I came closer and reached out with my hand to touch her. And see then, she put her head into my hand and held it in there for a long beautiful moment of trust. The ice between us was molten.

As soon as she allowed me to touch her, I inspected her closer. Her nostrils were plugged and looked bloody, and her entire coat was dirty and stunk for she brought the bloody mucus all over her coat. This was probably the reason why she didn’t groom herself anymore. She wasn’t able to take care of herself.

I needed to bathe her. But how?! Then I had the idea to prepare some warm Epson Salt solution and rub her body up with a wet towel. I did this treatment on the four following days. Lani accepted the treatment without protest.

After this treatment, she suddenly showed up in the living area to eat together with the other cats. YES! Lani was hissing on them as soon as they approached her but otherwise, all was good. About two weeks were gone since she came to us.

I hope you enjoyed this part of Lani’s journey. If you are curious about what will come next, please, join me in the following part of this story.

For now, I’m sending much Love and Light your way!

Nani or Wild Cougar in the Living Room. Part I

Nani or Wild Cougar in the Living Room. Part II

Heal Yourself, Heal the World with Reiki!